Three University of Tokyo undergraduates, who were in New York in mid-February to participate in the UN Commission on Social Development 55th session, called on Ms. Muriel Beach, ILC Global Alliance’s representative to the UN, to exchange views and perspectives on global aging and intergenerational relations. Their student volunteer program at the UN was recommended by the ILC Japan and coordinated by the ILC GA’s New York team. 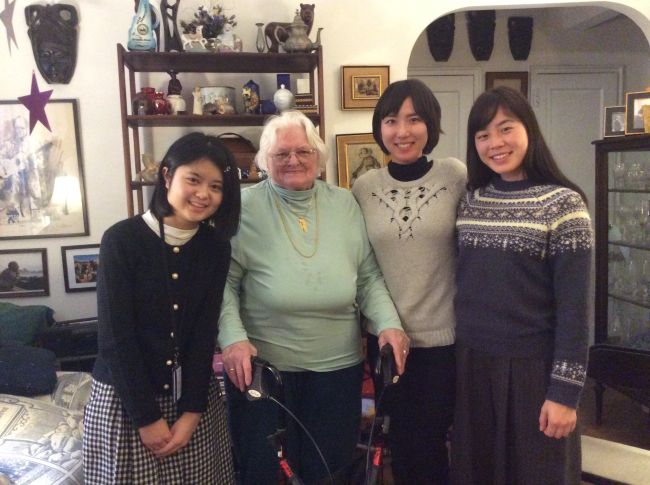 Muriel, a past president of New York Statewide Senior Action Council NYC Chapter and an active member of NGO Committee on Aging Subcommittee on intergenerational relations, discussed various facets of her long career as an activist on the local, state and international levels.

The students, Seira Ikarashi, Sawako Hirata, and Minami Yusa, were intrigued, and asked many questions, some of them pointed: Do you think your voice is heard at the UN?; What can you do to influence the UN decision making on aging?; I hear much about the deplorable condition at many nursing homes, what do you think should be done? A student also commented, “I became very interested in what Muriel said about the rights of elderly, and her message about the mindset that you just have to keep working hard to achieve what is need to be done.”

Ms. Beach, who recently suffered from a street accident, commented about her dialogue with the students, emphasizing the importance of intergenerational solidarity:

“I cannot walk, cannot see well but sure can talk and apparently make sense according to the students. I love Intergenerational exchanges and do think this was an excellent one. I tried to inspire them to work intergenerationally when they returned to Japan. Their questions were thoughtful and they were very attentive. Their comments in saying goodbye revealed they benefited from their visit and I felt they were being truly honest not just polite. It was a great morale booster during this difficult prolonged period of recovery. “

“The future rests with the young and intergeneration work is so important. We must help them overcome ageism concepts they might have and make them want to spend time with their elders. All elders have lived interesting lives – talk about that to the younger generation not present a series of statements of Aging aching body issues. We have knowledge to pass on but must do it in a way to entice the young to want to be around us. I stressed today we need each other. I sincerely hope that other centers of the ILC group will also promote intergenerational projects.”