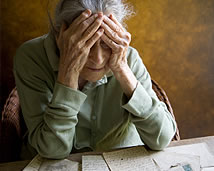 Commensurate with population ageing the number of people with dementia across the world is set to increase.

The World Alzheimer Report 2009 produced by Alzheimer’s Disease International reports that there are currently 35.6 million people with dementia with the numbers set to double every 20 years to 65.7 million in 2030 and 115.4 million in 2050.

With proportionate increases over the next twenty years in low and middle income countries, compared with high income countries. There is no longer just a moral and social argument for prioritising dementia; the economic imperative is now overwhelming and the implications for health, social care and research will be profound.

Women and Dementia – Not forgotten

ILC-UK has published a report calling for a gendered approach and response to dementia at the national and international level.

The report reveals that the dementia research agenda in most EU countries remains critically under-funded and under-valued.

A problem shared is a problem halved? Dementia: Learning opportunities from Europe

This policy brief aims to stimulate debate and drive improvements in dementia research, diagnosis, treatment and care by identifying key priorities for action at the Member State and EU level.

ILCSA was admitted to the ILC Global Alliance in June 2005. It is operated within The Albertina and Walter Sisulu Institute of Ageing in Africa (IAA) in the Faculty of Health Sciences at the University of Cape Town.

Report from the Ministerial Summit on Dementia Research

This ILC-UK report summarises the presentations, discussions and ideas which emerged from the Ministerial Dementia Research Summit held in July 2009 at the Royal Society in London.

An ILC-UK research report formed from an expert roundtable discussion and dinner on 'Recent Progress & Innovation in Dementia, Diagnosis, Treatment and Care' held in June 2009 in the House of Lords.