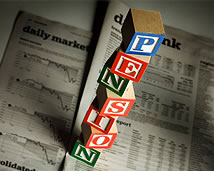 Decent pensions provision for people in later life is one of the hallmarks of civilisation.

Yet the generous entitlements established in most affluent countries are under threat from the fiscal implications of increased longevity and the economic downturn.

Raising state pension ages without creating inequitable outcomes will be a key challenge. Pensioner poverty remains a significant problem in many countries, especially in the developing world, but efforts to tackle poverty through means-tested benefits risks undermining savings incentives at a time when many individuals are being asked to save more for their own retirement.

Older people aren’t always getting the most from their retirement savings, according to a new report, by Jackie Wells for the ILC-UK.

Pension Reform and Personal Accounts after the Credit Crunch

This ILC-UK brief summarises the ILC-UK/ Actuarial Profession joint debate on the future of personal accounts and pension reform after the credit crunch, which took place in London in March 2009.