Muriel Beach, ILC GA New York Team Member, Received Trophies for the First Place and for a Special Award, Personality Plus” at a Senior Planet Event in New York

On June 28, 2017, Senior Planet in New York held an all-day session titled “Hack Aging.” The event, designed by Debbie Galant, was attended by approximately 80 persons. Muriel Beach led a group focused on the problem of negative concepts of aging (which Dr. Robert Butler called ageism) and won the First Place for the group and a special award, “Personality Plus” for herself. 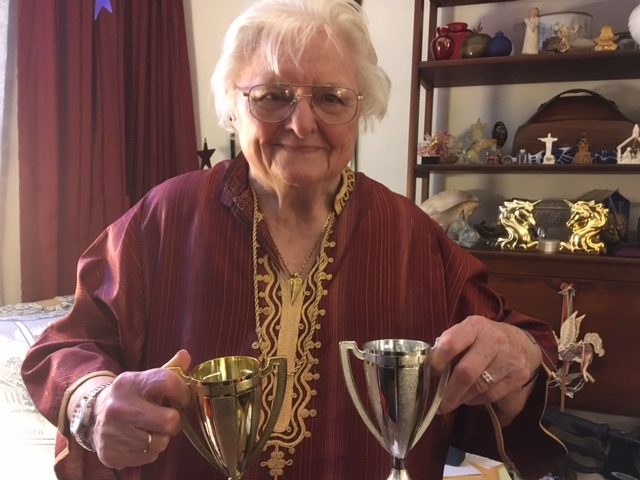 Muriel reports: “I selected to work with a group on identity. How to solve the problem of negative concepts of aging. Yes, Bob Butler called it ageism. Development of the dynamics of the group,  total strangers, taking each other's ideas and building on them was mind blowing. We worked for hours and then each group made a presentation to the whole room and some judges. Our group won and we have cups stating First Place. You know how dear this topic is to me so I am thrilled. The group asked me to introduce the group, the topic which I loved and then they presented programs, tactics. They deserved this award…I also received a special award and cup called, “Personality Plus…I had a fantastic day!”

She added: It is exciting to see how its Executive Director Thomas Kamber uses the Senior Planet not only as a lab teaching technology to seniors but extending it to a venue to explore social issues.”

Thomas responds to Muriel: “Thanks, Muriel for the great report, and for providing so much energy and guidance throughout the day. It really was wonderful to see so many diverse people coming together to work on issues like housing, transportation, ageism, and home care.

What Muriel didn't say is that she gave a rousing call to action around the value of engaging older adults as agents of change–inspiring people to see how we can solve ageism while we solve problems, but that it has to be collaboratively with older adults driving the agenda. People clapped and cheered while she was talking and it was a great moment during the hackathon.”

The “Hack Aging” event was featured in Richard Eisenberg’s article in Forbes, “How to Improve Aging? Hack It.” (https://www.forbes.com/sites/nextavenue/2017/06/29/how-to-improve-aging-hack-it/#5af569a61acb)