Alexandre Kalache, President of ILC-BR and Co-President of the Alliance, delivered the keynote at the seminar in Montevideo. The event was organized by the City Government of Montevideo. 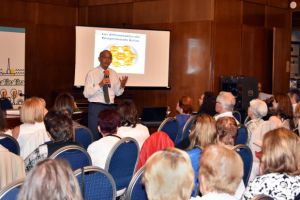 On 12 December, the City Government of Montevideo (Uruguay) organized the International Seminar on Age-Friendly Cities and Communities. The seminar was opened by the Mayor of Montevideo, Daniel Martínez; the Minister of Health, Jorge Basso; the Sub secretary of Social Development, Ana Olivera and representatives of the Pan-American Health Organization (PAHO) and the United Nations Population Fund (UNFPA).

In his key note, Alexandre Kalache – who is the father of the WHO programme on Age-Friendly Cities which this year celebrates 10 years since the publication of the Global Guide on Age-Friendly Cities -, spoke about active ageing, the foundation of AFC, and about the principles to be followed to become an age-friendly city. The seminar also counted on presentations by Maite Pozo of IMERSO (Spain) and Silvia Gascón of the University Isalud (Argentina). Their presentations added practical experiences of implementing the project in Spain and Argentina, respectively. Representatives of all sectors (public, private, civil society, academia and others) participated in the seminar.