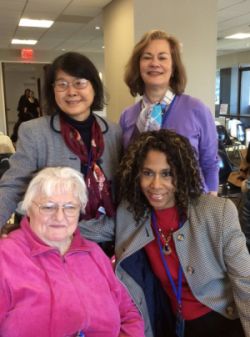 Together with current ILC GA Representatives in New York, Drs. Lia Daichman, Ruth Finkelstein, and Masako Osako, they will work closely with the New York NGO committee on Aging and the Stakeholder Group on Aging.

Ms.Murial  Beach is a current vice president and past president of New York Statewide Senior Action Council  NYC Chapter. An experienced public speaker, she has served numerous committees, including the NGO Ageing Committee SubCommittee on Intergenerational  Relations, the UN International Day of Older Persons Planning Committee, the Community Advisory Committee of BRC a homeless shelter, the Executive Board of the Chelsea Reform Democratic Club, member of the Manhattan Borough President's Senior Advisory Committee. And under New York Statewide Senior Action Council Muriel has served several years on the State executive board  of that organization.

An experienced interviewer, writer, and project manager, Laurie Norris has worked cooperatively and independently on a range of projects involving foreign and domestic collaborations, including books on global health issues. She concentrates on healthy aging and patient advocacy, intergenerational and intercultural issues, and works with people at all stages of the life course. Laurie supports and oversees a series of worldview internships for college students at various organizations and an internship at the American Federation for Aging Research in honor of her late husband, Clarence Pearson. At the UN, Laurie is an active member of the NGO Committee on Ageing Subcommittee on Intergenerational Relationships, the UN International Day of Older Persons Planning Committee, and a writer of the 2015 IDOP event report.

Ms. Morriseen Barmore has many years of  experience as a  project management specialist. Through working closely with late Dr.Robert N. Butler, former CEO and founder of ILC USA, she has been extensively involved with organizations focusing on aging-related issues. She has a long-standing interest  in ethnicity and religion pertaining to the life of older persons. She is currently with the Edwin Gould Foundation.

With the addition of a seasoned public speaker (Ms. Beach), an accomplished writer/interviewer (Ms. Norris), and an experienced project manager (Ms. Barmore) to its New York team, the ILC Global Alliance looks forward to enhancing its effort in helping societies to address longevity and population ageing in positive and productive ways.

For details about the ILC Global Alliance, see: www.ilc-alliance.org.

Last month, UK Minister for Employment, Mims Davies MP, announced the shortlist of our international Work for tomorrow competition that is seeking to identify and award the most promising innovations responding to an ageing workforce.

The COVID Revolution: The resilience of older adults during the COVID-19 Pandemic

ILC-Japan has compiled the results of interviews with older adults in Japan conducted during the COVID-19 pandemic.