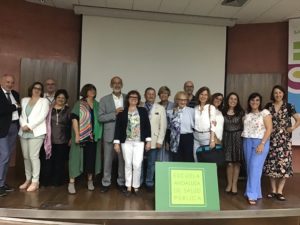 Under the auspices of the Andalusian School of Public Health (EASP) Alexandre Kalache, co-organised, moderated and gave the inaugural keynote address of the First International Longevity Forum in Granada. Baroness Greengross closed the Forum with an inspiring keynote on the Future of Ageing. Her remarks crowned a full day of presentations and debates around the challenges and opportunities of the current longevity revolution within the Active Ageing framework.  (full programme in Spanish and English attached and also availabe at EASP website). Silvia Perel-Levin delivered an insightful presentation about the UN system with a focus of the human rights of older persons. In addition to her role as ILC-GA Representative to the UN, Silvia chairs the NGO Committee on Ageing in Geneva.

The day before the Forum around 20 experts on ageing, from a range of academic and civil society organizations covering diverse disciplines, speakers at the Forum, held an enthusiastic meeting to explore the potential creation of a new ILC body that would bring both Spain and Portugal into the ILC-GA family. The consensus was that there is a need for an interdisciplinary THINK TANK on ageing composed of key individuals from both countries. The newly adopted working formula (attached) devised by ILC Brazil may serve as the starting framework for such an Iberian Peninsula ILC (IP-ILC)

The Forum was followed, on 5 June, by a full-day symposium centred on the presentation of local and regional Active Ageing initiatives.

The Andalusian School of Public Health will take the initial coordinating role and hopefully there will be an application to ILC-GA in due course. So, watch this space. We will follow up on the development of the IP-ILC.