We are delighted to announce that ILC-UK Chief Executive, Baroness Sally Greengross OBE has been awarded a special Lifetime Achievement award by the British Geriatric Society (BGS), on the occasion of their 70th anniversary celebrations. 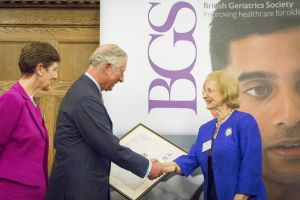 At a ceremony attended by patients, members of the BGS, doctors, nurses and healthcare workers, HRH The Prince of Wales presented Baroness Greengross with the award for her contribution to improving services for older people, and her ongoing support for the BGS.

Picture: HRH The Prince of Wales and Baroness Sally Greengross.