Senior citizens participated in a flash mob that spread the message on the need for saving and conserving water as part of ILC-I’s Environment protection initiatives. 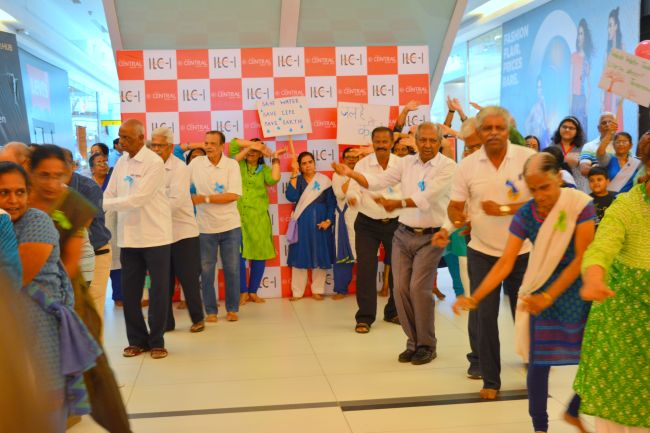 ILC-I looks upon senior citizens as catalysts of change, especially with regard to Environment Protection initiatives and to spread the message of saving and conserving water on the occasion of the World Environment Day of the 5th of June, a flash mob of senior citizens was organised at the Pune Central Mall, Koregaon Park, Pune, on the 4th of June 2017.

Forty seniors participated in this flash mob which was the first of its kind in Pune by senior citizens. They danced to the songs that espoused the cause of water conservation, gently waving placards that also displayed ‘Save Water’ messages.

The energy and enthusiasm of the seniors was heightened as ILC-I had arranged for the seniors to enjoy some quality family time with their children and grandchildren at the Pune Central Mall, opening up an opportunity of celebrating intergenerational solidarity. Transport arrangements had been made to bring along two hundred and fifty senior citizens with their families to the Mall, where, besides the flash mob, fun-filled activities like games, songs and dance were also organised which enthralled all the members, young and old, while they also enjoyed the refreshments served to them.

The flash mob video clip has been uploaded onto You Tube for everyone to view – click here to see the video.