Co-founder of ILC, Mr. Shigeo Morioka has passed away 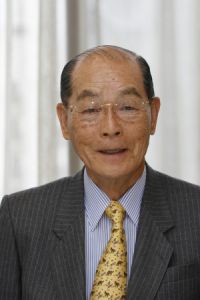 Mr. Shigeo Morioka, co-founder of ILC with Dr. Robert Butler, was a good friend to all ILC members and honorary president of the ILC Global Alliance at the time of his passing.

He had been well until the week before he died, living independently at home. He indeed embodied a productive life until the end.

In 1990, Shigeo supported Dr. Butler’s vision for an ILC and co-founded the organization in Japan and the United States. He subsequently dedicated himself over the next 30 years almost to realizing productive aging, influentially involving the industrial, government and academic sectors.

He had previously served as CEO of the Yamanouchi Pharmaceutical Company (now Astellas Pharma Inc.), and  enjoyed wide networks across the globe. He had a calm presence and excellent  decision-making skills, as well as a broad knowledge of gerontology. He was always a gentleman, humorous, and trusted and loved by many worldwide.

Only two weeks before his death, in a business meeting at ILC Japan, he looked back on the past three decades and expressed great joy: “It’s wonderful that ILC has grown this big and built its global presence. And now, it is playing a significant role in our society. I would like to continue to provide further support.” He truly exemplified productive aging.

Shigeo’s wish was for all in the ILC Global Alliance to work together and contribute to society, while fostering quality research and education.

We will indeed strive to continue our work to build a society in which older people can play active and productive roles, as Shigeo wished. That will be the best way we can pay tribute to Shigeo.