The Anjani Mashelkar Inclusive Innovation Award is an annual award of Rs. 1 lakh given to an individual or an organisation for an idea, prototype or a commercialized product, service and business model. 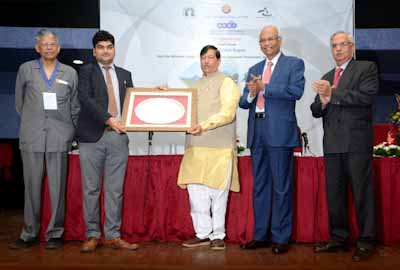 The Anjani Mashelkar Inclusive Innovation Award is an annual award of Rs. 1 lakh given to an individual or an organisation for an idea, prototype or a commercialized product, service and business model. The innovation must address the problems faced by the disadvantaged resource-poor people in India and offer an original and implementable solution.

This award presents an opportunity to spur and fuel innovation for the benefit of the most disadvantaged sections of society in order to ‘include’ them into the mainstream. It also has another equally important aim: to sensitize innovators about the problems faced by such sections of society- such as the resource poor elderly people.

The Anjani Mashelkar Inclusive Innovation Award for the year 2018 was awarded to Dr. Vinay Kumar .

On a mission to change this, Dr. Vinay Kumar set up PathShodh Healthcare. The company was incubated at the Centre for Nano Science and Engineering (CeNSE) at the prestigious Indian Institute of Science in Bangalore. Here, medical device anuPath was created – a point of care bio-sensing device for managing diabetes, chronic kidney disease and anaemia & malnutrition. This single device is capable carrying out 8 tests on a tiny blood sample within 60 seconds. What’s more, it does not need special storage conditions and is ultra-low cost – 80% cheaper than conventional testing methods!

This revolutionary innovation has already been used to screen about one lakh people from 3 states in India. Soon, it could have a positive impact on the lives of all who are affected by diabetes. In recognition of this disruptive and affordable innovation, the Anjani Mashelkar Inclusive Innovation Award for 2018 was presented to Dr. Vinay Kumar by the Hon’ble Minister of the State of Maharashtra, Mr. Girish Bapat on the 17th of November 2018.