A brief tour of Japan

Tokyo is not the kind of place where one particular location attracts everyone. Rather, the city has a number of busy districts centred around major train stations, as well as many traditional-style streets. For example, Ginza is a traditional high-end shopping district, while younger generations would rather go to Shibuya.

Unlike in 2020 and 2021, when the city was quiet because of COVID-19, Tokyo now is returning to normal, with more people going out and more tourists visiting from across the world.

While it is nice to visit tourist destinations such as Kyoto and Nara, you may also want to explore different neighbourhoods in Tokyo and other places as well. Let us give you a brief tour of different communities in Japan.

When you visit Japan and look around, you will easily find many older adults walking along busy streets around stations. Quite a few of them are in a hurry as they are in the middle of work.

But many older adults are also strolling the streets, taking their time, and don’t seem to be working.

While Japanese public pension system has a low income replacement rate, it continues to provide many benefits based on the old family structure before women started working outside (e.g., preferential treatments for full-time housewives, generous survivor benefits).

At department stores, you may get the impression that these places wouldn’t survive without the spending power of older customers.

In Japan, people aged 60+ own the majority of financial assets (68.5% of household financial assets). According to a report, shareholders aged 70+ own 41% of Japanese companies’ stocks.

Now, let’s move to residential areas. You can also see many older adults walking and talking on the street. In most cases, women are out with their friends, while men tend to go out alone.

But if you move further from big cities, you may find communities rather quiet. Why? Because the country is having fewer and fewer children.

On the outskirts of residential areas, you can easily find different types of elder care facilities.

Japan has a LTC insurance system for older adults, funded half by public money and the other half by premiums. Under the system, services are available also to people with mild disabilities, who are independent in basic activities of daily living (e.g., eating, toileting) but need some assistance or monitoring in instrumental activities (e.g., housework, dressing). The system also provides a care manager for each user to coordinate services and includes support for community development to help older adults. The system is therefore exceptionally generous and extensive compared with those in other countries across the world.

When you walk around a town, you see clinics everywhere, each having a speciality such as internal medicine, orthopaedics, and ENT (ear, nose, and throat). There are also many dentists and drug stores. Large drug stores are almost like supermarkets, offering beauty products and everyday items as well as medicines. There, you will also see many older adults.

How are these systems funded?

Taxes and insurance premiums are not the only fiscal resources of the systems that support older adults. Japan’s debt to GDP ratio reached 259% in 2021, being the top in the world followed by Greece (224%) and Italy (173%). In other words, Japanese social security systems heavily rely on the national government debt that has been constantly increasing over the years. As most of the debt is spent within Japan, the country is unlikely to face hyperinflation led by credit uncertainty. Yet, since the government cannot keep issuing bonds without limit, this financial situation makes it difficult for the country to invest in essential fields such as growing industries, education, and family support, which may limit future generations’ freedom of policy choices. Japan’s GDP has been slowing down in recent years, falling from 2nd in the world in 2000 to 27th in 2022. 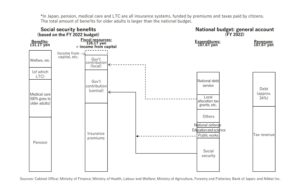 An aged society is supposed to be a prosperous and mature society made possible by the efforts of all generations, including older adults’ creative activities based on their rich experience and wisdom. It should never be something that brings stagnation to the current and future societies.

Japanese older adults do have high employment rates, and they do make significant contributions to Japanese economy and community development. Still, considering their responsibilities as members of the growing age group in the country, older adults need to contribute to more effective investments. Rather than depending on the public sector, they should work with the sector to shift the focus of community-based care from “service-oriented and ‘doing-for’ care” to personalized support for well-being that stresses independence and self-determination. They should also contribute to healthy development of children and become key players in enriching communities.