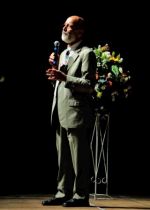 The Open University of the Third Age of the State University of Rio de Janeiro, host to the office of ILC-BR, celebrated its 25th anniversary with several events held during the week of the 20th of August. Having accompanied the history of the institution since its foundation, Alexandre Kalache delivered a master class on the longevity revolution, with a focus on inequalities.

During the months of July and August, Alexandre Kalache, President of ILC-BR, also delivered keynote speeches at several other events, e.g. the National Congress on Human Resources and the Wired Conference Health and Wellness.