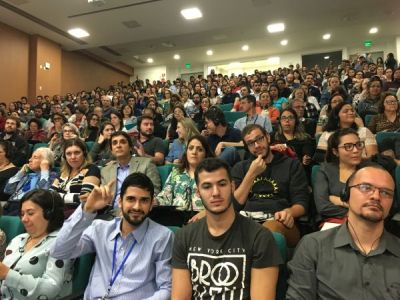 ILC-BR organized for the first time the International Longevity Symposium to celebrate five years of the International Longevity Forum, which occurs annually in Rio de Janeiro. This was also a response to the increasing demand by professionals to have a similar initiative in São Paulo. The event was very well attended by health professionals and students from various backgrounds.

Just as the International Longevity Forum, the Symposium focussed around the development of resilience along the life course. Two of the speakers presented innovative practices from abroad: Gabrielle Kelly shared her experience of establishing the Resilience and Wellbeing Centre in South Australia and provided an insight into the methodologies used to teach resilience to various population groups. The Centre, located within the South Australian Health and Medical Research Institute (SAHMRI), incorporates Dr Martin Seligman's PERMA dashboard (Positive Emotion, Engagement, Relationships, Meaning and Accomplishment) PLUS, Physical Activity, Nutrition, Sleep and Optimism, to measure and teach resilience and wellbeing. Gabrielle presented evidence on how to build positive mental health and wellbeing throughout the life course.

Next, the Dutch nurse Jos de Blok, founder of the quickly expanding community care model Buurtzorg, spoke about the origins, functioning and impact of Buurtzorg, which started ten years ago. Buurtzorg is a holistic response to the problems in the Dutch health care system, which in the way it went 10 years ago was going to be unsustainable. According to Jos, the strength of Buurtzorg, which has already expanded to countries on all continents, comes from nurses who should feel empowered to deliver care and not managed top-down. He further says that the best result expected is a patient that does not need the care any longer. It is about empowering the patient and connecting informal care systems, instead of focusing all efforts on formal and expensive care.

Last, the Spanish sociologist Daniel Prieto Sancho spoke about resilience from a conceptual point of view, making special reference to the context of care. He questioned the principle and goal of independence, suggesting that very few privileged people can actually be independent and that other than that we are all interdependent. He concludes that resilience results of a collective process.