Thoughts on an (ageing) Island

In May, members of the ILC Global Alliance met on Bintan Island, Indonesia, for a strategic planning meeting and protocol development workshop. We had a productive and inspiring meeting that will carry our work forward well into the future.

However, dipping our toes in the South China Sea, our thoughts turned to many shores and the impacts of ageing for island populations. Islands are, of course, numerous and diverse, and not all are equatorial paradises like Bintan. Islands may also be at different stages of the demographic and epidemiological transition, and vary according to population size and land mass. But they all face numerous and complex issues associated with population ageing, globalization, and climate change.

The urgency for some smaller and more low-lying islands is rising along with sea levels, which are a major and imminent threat. These threats include poor crop yields from salt inundation, increase in flooding and other natural disasters, and in some cases, loss of coastal housing and diminishing land mass.

Population densities on most islands have increased steadily since the 1950s and will continue to increase through 2050, alongside population ageing. Even comparatively young island countries are rapidly ageing, with increasing proportions aged 60+ (see Table). 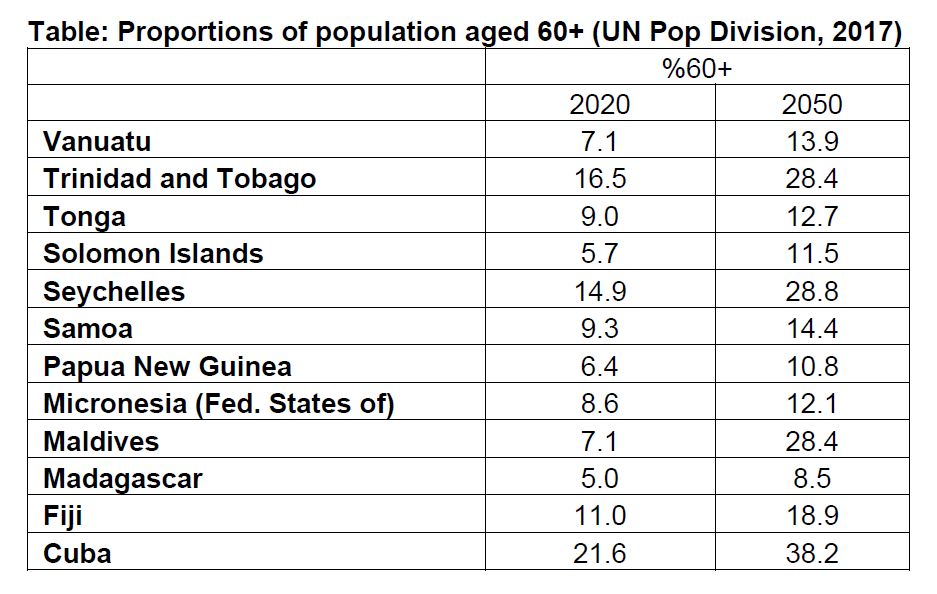 Ageing, coupled with population growth and climate change, will have considerable impacts on health.

The figure (below) shows the current Healthy Life Expectancy (HALE) at birth and lost healthy years (the difference between life expectancy and HALE) for selected island states. The figure illustrates the opportunities to improve longevity, and for gains in healthy ageing among people in these countries. On average, individuals in these selected countries spend at least 7.5 years of their lives in poor health. Each has the potential to add health to years. 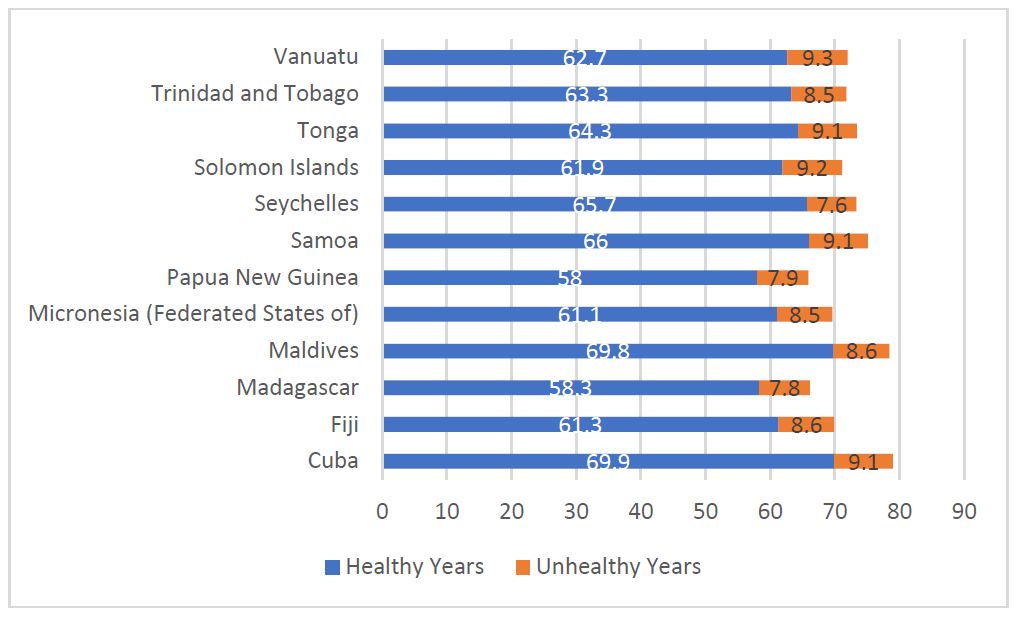 Recently, Ian Anderson and Wayne Irava published a paper on the impact of ageing on the health systems and other resources for Pacific Islands. They emphasise that, unlike larger and mainland populations, these smaller and geographically constrained population groups cannot rely on the demographic dividend to help them through these transitions (Anderson and Irava, 2017). Likewise, a recently published report “Health System Responses to Population Ageing and Noncommunicable Diseases in Asia”, noted the need for health systems in countries like Sri Lanka to adapt, and the challenges these smaller island nations will face given the other health demands, and their limited resources (Yiengprugsawan, Healy and Kendig 2016).

While climate, environmental and cultural issues related to ageing on island states are perhaps more prominent than mainland counterparts, there are also similarities, such as clinical and public health measures that influence wellbeing. Results from a recent study in Barbados for example, illustrate the challenges posed in low-resource settings for implementing international best practices in acute ischaemic stroke management. High levels of hypertension and obesity in the context of health systems challenges are contributing to concerns about specific conditions like stroke, but also healthy ageing (Harewood-Marshall et al., 2018).

Paul Kowal and Julie Byles have long argued for studies that help us to understand ageing from the perspectives of various Island populations. A comparative longitudinal study on ageing and adult health would provide an evidence base to address the issues faced by ageing islander populations, and unique insights into ageing in these contexts and the potential for healthy longevity. Many of these Islands are countries or part of nations with few resources for research, but let’s not forget that many higher income countries such as England and Australia are also Islands. We need to be concerned for the fate of our neighbours, as well as our own.

Professor Julie Byles is the Head of ILC Australia, and Global Innovation Chair in Responsive Transitions in Health and Ageing at the University of Newcastle in Australia.

Dr Paul Kowal is a Conjoint Academic with the University of Newcastle’s Research Centre on Gender, Health and Ageing, Senior Research Advisor at Chiang Mai University Research Institute for Health Sciences, and a scientist with the World Health Organization’s Multi-Country Studies unit. 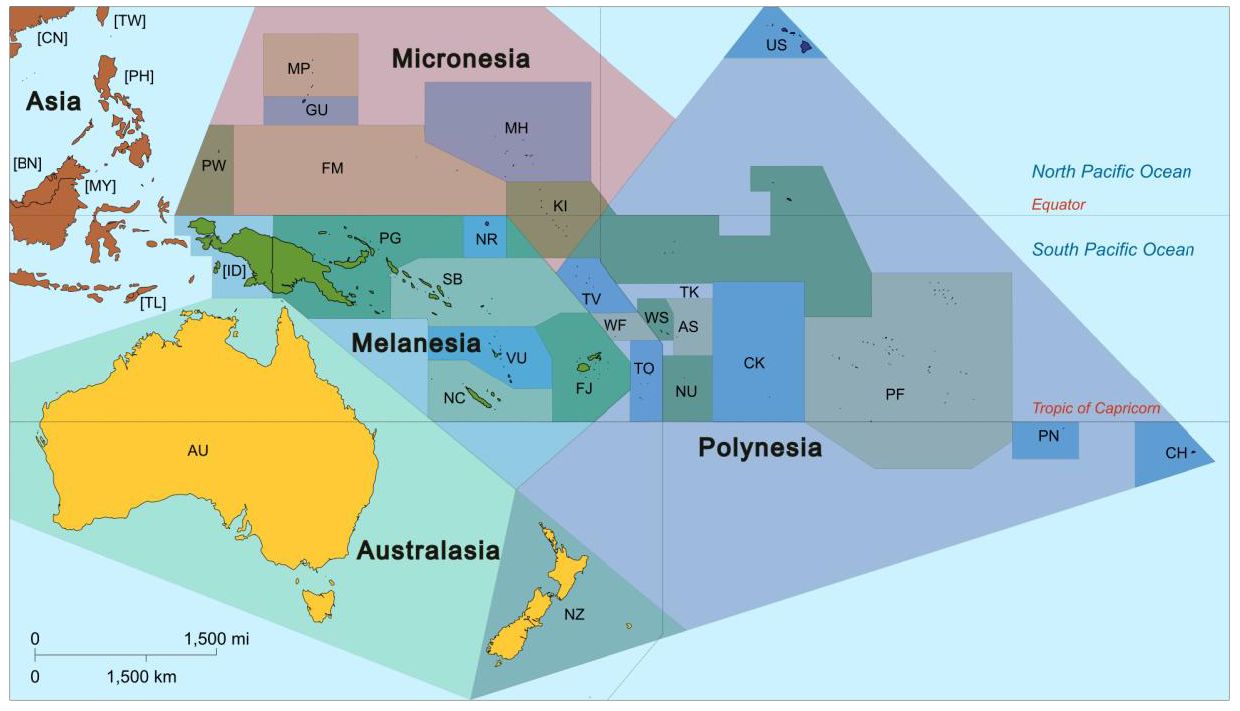