Webinar: From Awareness to Good Practices

On 15 June 2021, ILC Argentina, the Government of the City of Buenos Aires and the Geriatrics and Gerontological Society hosted a Latin American Conference: “FROM RAISING AWARENESS TOWARDS GOOD PRACTICES", to commemorate World Elder Awareness Abuse Day within the framework of " the Decade of Healthy Aging "(2021-2030). 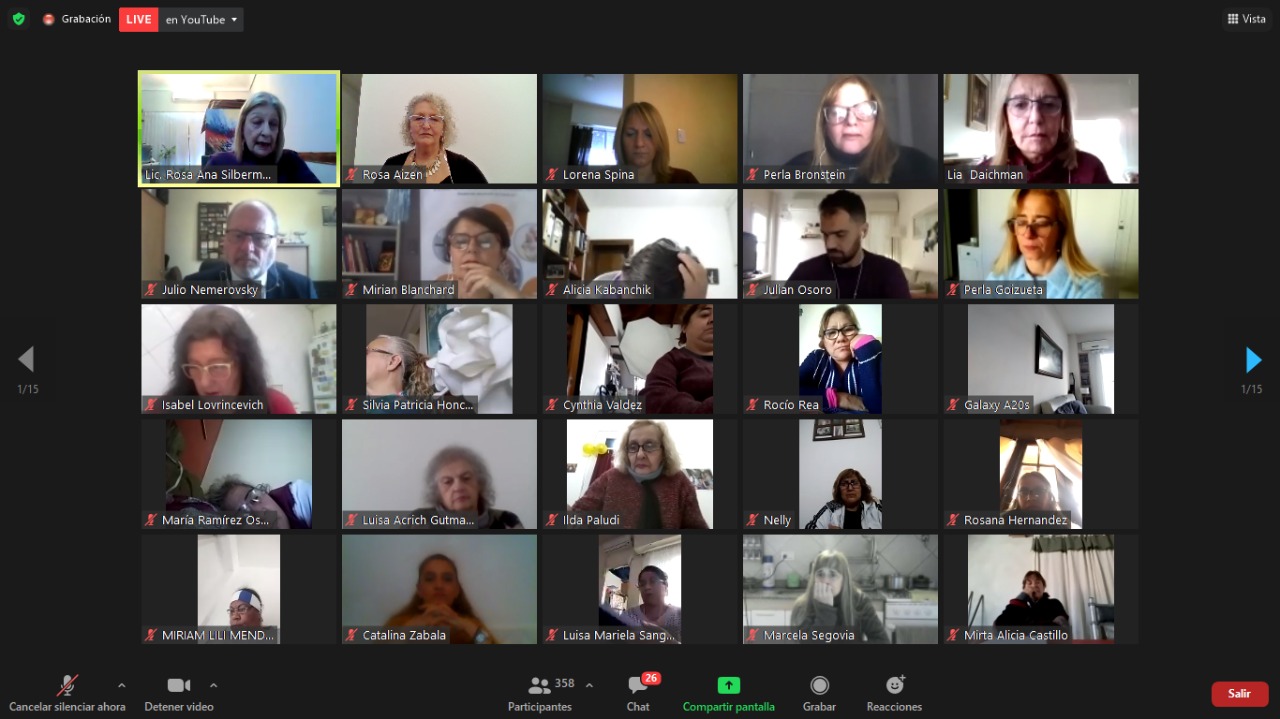 The event was divided into four roundtables, and was attended by three hundred and fifty people from all over Latin America.

The first roundtable focussed on the daily abuse towards older people, and was coordinated by Dr Perla Goizueta, Public Defender of the Nation and representative of the Elders Rights Foundation in Argentina.

The first speaker was Dr Eugenio Semino – Lawyer, Ombudsman of the Third Age, who made a presentation entitled: “The Old Age Apartheid”, mentioning the various measures to limit autonomy and flatten the amounts of pension assets that contributed to the exclusion of older people, generating a true “Apartheid”.

Second, Dr Isabel Lovrincevich – Lawyer and Vice President of the Global Alliance for Human Rights of Older Persons, made a presentation entitled: “Digital Division. Distributing Books to Those Who Cannot Read”, referring to the effect of symbolic violence, financial abuse and social exclusion represented by the digital division in which the majority of older people are immersed.

The third presentation, entitled: “Notarial Action in Pursuit of the Legal Security for Older Persons”, was led by Notary Patricia Lanzón – President Com. Human Rights, Personal and Self-protection of the College of Notaries of the City of Buenos Aires, and made reference to the new paradigm prevailing in Argentina since the reform of the Civil and Commercial Code of the Nation in August 2015, which imposed Capacity as a rule and provide support in the face of the limitations that may appear, and on the importance of notarial action in that scenario.

The fourth and last presentation of this first roundtable, entitled: “The Media… From Old Age to Good Practices”, was led by Mg. Miriam Blanchard – Journalist in charge of the “Vivir Plenamente, TV and Radio program and member of ILC Argentina, who referred to the repeated signs of old age discrimination that we have been able to observe in all the media for many years, but that have intensified since the COVID-19 pandemic.

The second roundtable, entitled: “Institutional Abuse. Truth and Consequence”, addressed the issue of abuse from institutions and was coordinated by Dr Lía Daichman – President of ILC Argentina and Past President of INPEA, with the participation of four speakers.

The first presentation was given by Dr Mariana Soledad Sánchez Ábalos – Hospital Regional de Ushuaia, and was entitled: “Institutional Aging… A Barrier for Everyone?” The second presentation, entitled: “Mistreatment and Abuse of Patients Admitted to the Acute Hospital in Pandemic”, was given by Dr Catalina Zabala – Geriatrician from the Hospital Geriatric, Province of Corrientes. The third intervention, entitled: “Care, Caregiver and Institutional Standards. Multidisciplinary Strategies” was given by Mg. Fabián Tommasi – Kinesiologist in Long Term Residences.

And finally, the fourth speaker, Dr Maya Sinjovich – ILC Argentina/Geriatrics Unit Hospital Ramos Mejía, gave a presentation entitled: “The Elderly Beyond Triage in the Context of COVID-19”. All these lectures aimed to show from a federal perspective what happened during this pandemic with institutionalized older people, relating strengths, weaknesses and feats that each one could participate in from their place in the fight against this scourge.

The third-round table entitled: “COVID persists…. Reinvention of Professional Practice”. It was coordinated by Dr Lorena Spina – Operational Manager of Comprehensive Training of the Secretariat for the Integration of Older Persons, City of Buenos Aires/ILC Argentina. This issue was addressed from the perspective of the professionals who perform the intervention – the four speakers from a biopsychosocial perspective discussed the adjustments they had to make in their work to adapt it to the new epidemiological reality.

The first speaker was Dr Wanda Gisbert – SAGG/ILC Argentina, who presented on “Undecided Decisions”. The second speaker was Psych. Rosa Aizen – Comprehensive Training Operational Management from the Secretary for Integration of Older Persons, Gov. of the City of Buenos Aires and ILC Argentina Executive Member, presented on “From isolation to introspection. The 3 flows of care”.

The third presentation was given by Dr Myriam Cataldi – National Judge of First Instance in Civil Court 7, on “Some new activities from a Family Court” and gave us a legal framework. And finally, Dr Alicia Kabanchik’ – ILC Argentina/Psycho Geriatrician, The Maimonides University, gave the psychiatric perspective from in a presentation entitled: “Emotional Divorce” by highlighting the effects of isolation in the elders.

Finally came the closing ceremony roundtable. This time the professionals gave a panorama and the different forms of violence, abuse and mistreatment to older people in Latin America during the pandemic. They were Dr Lia Daichman – ILC Argentina President, Dr Margarita Murgieri – SAGG Past President, Dr Paula Zingoni – The Ministry of Health, Government of the City of Buenos Aires, and Dr Alex Kalache – President of ILC Brazil.