How Healthy are Europeans?

Europeans are extremely lucky. Not only can they expect to live longer than most people born anywhere else in the world, they can also expect to enjoy most of their lives in relatively good health.[1] But life expectancy is only …

Europeans are extremely lucky. Not only can they expect to live longer than most people born anywhere else in the world, they can also expect to enjoy most of their lives in relatively good health.[1]

But life expectancy is only one, though arguably the most important, indicator of health of the population in a country. Other indicators include functioning well mentally, physically, and socially, as well as having a sense of well-being. These health outcomes depend on the interconnection of cultural, environmental, social, economic, behavioural, and genetic factors. However, governments can also play a crucial role in improving the health of their populations, as they can improve healthcare services to prevent and to cure illness and disease, and to support people with chronic disability. In the context of population ageing, with increasing numbers of people likely to develop a disability at some point in their lives, the effective provision of healthcare services is even more essential.

Even though, on average, Europeans enjoy good health, there is considerable variation across countries. This variation exists both in terms of outcomes and in terms of healthcare strategies, since governments can organise and finance their healthcare systems in very different ways. Some systems are indeed more successful than others.

To understand the extent to which governments across Europe have adopted successful healthcare strategies, a recent report from the ILC-UK carried out an empirical investigation using historical data from the region. By extracting data on expenditure levels, public/private interaction, and healthcare system capacity, the report identified three distinct groups of healthcare strategies, and then assessed their impact on a weighted index measuring health of the population.

The Health Index was derived by combining information on self-reported measures of well-being by age group; life expectancy and healthy life expectancy at birth and at age 65 for men and women.

The Swiss, Icelandic, and Swedish people appear to be the healthiest, even though Southern countries – especially Italy and Spain – still benefit from higher life expectancies. Furthermore, Spain and Italy are the greatest success stories, as they gained 12 and 9 positions respectively since 2003. Conversely, Denmark and Germany have seen their positions deteriorate by 7 and 6 points respectively. 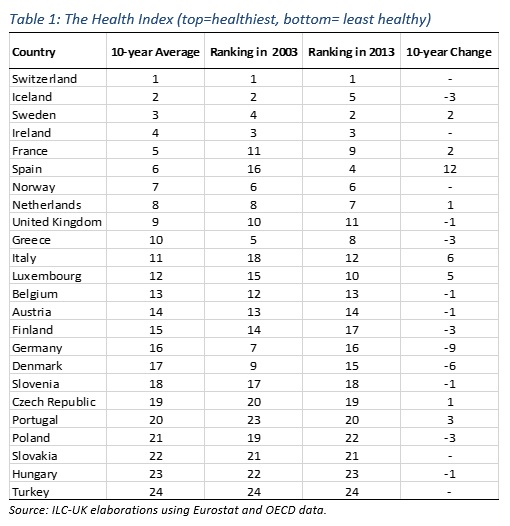 It is worth mentioning that once we take into account the age structure of the population, and how this is likely to affect the Health Index regardless of the soundness of their healthcare systems, mid-ranking countries like Spain or Greece perform a lot better.

Total healthcare spending is clearly an important factor. As figure 1 shows, countries spending more on healthcare as a proportion of GDP are also top ranked on the Health Index in table 1 (e.g. Switzerland, Sweden and France). However, the amount of money spent on health is only part of the story. Healthcare strategies differ from each other in terms of public/private participation, social protection for sick or disabled people, hospital capacity as well as availability of high tech facilities.[2] 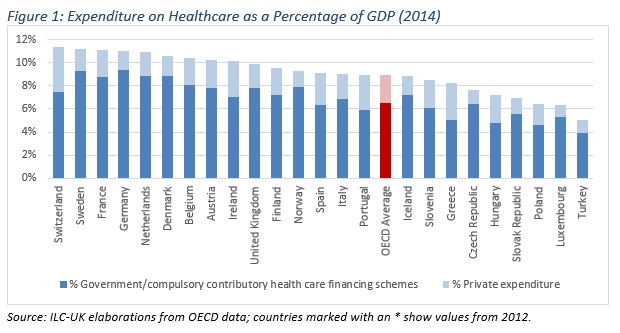 Hospital capacity (as measured by the number of beds per 100,000 inhabitants)– particularly large in Germany – does not seem to lead to better health outcomes. One possible explanation is that hospital beds only make meaningful contributions to a hospital’s ability to treat someone if they are accompanied by appropriate health infrastructure, including trained professional and managerial staff, equipment and pharmaceuticals

Clearly, not all countries can afford the level of generosity of the rich Swiss, but it is important to bear in mind that – when dealing with limited resources – some strategies are conducive to better outcomes, and that throwing more money in is not necessarily the answer. For instance, increasing the number of hospital beds may not lead to better health if it comes at the detriment of technological equipment. It is also worth pointing out that participation of the private sector in healthcare may be very successful if seen as an addition to public spending; however, it is likely to lead to worse outcomes if it replaces, rather than complements public spending.